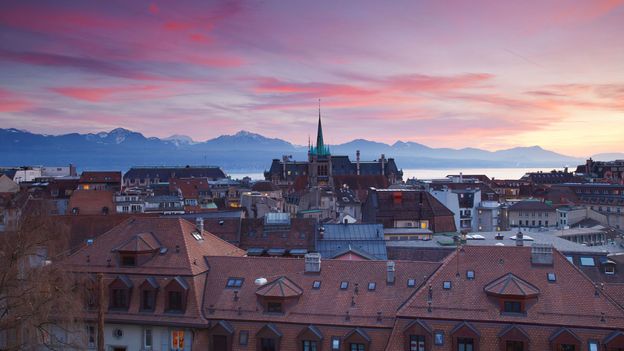 For 33 years, from 22:00 to 02:00, Haeusler has gazed out at this view from Lausanne Cathedral and wondered vaguely: Who is on the streets below? Where are they are going? And does anyone realise he is high above them, squirreled away inside the belfry? “Je ne m’ennuie pas,” he said, pausing to soak up the utter stillness of the city. “I never get bored, and every night it is a pleasure to be up here. To see the moon in the lake. The twinkling lights of the houses. Sometimes, France in the distance. I like it so much you can’t imagine.” Haeusler, 61, is one of the world’s last Night Watchmen and probably the closest thing we have in the modern age to a real-life character from The Lord of the Rings or Game of Thrones. Dressed in a tunic and wide-brimmed black felt hat and gripping a flickering oil lantern, he is a dying breed, a portrait from another age and yet seemingly all the wiser for it. You may also be interested in: • How Innsbruck sold bells to the world • Why First Nations communities are uninviting visitors • The Swiss town obsessed with the number 11 The rituals of Night Watchmen across Europe have changed little since they were first introduced. Hundreds of years ago, beginning as far back as the 9th Century, city mayors and civic leaders from London to Prague to Salzburg demanded greater levels of overnight protection. From policing dark streets to watching for fires, foes and extremities of wind and weather, such sharp-eyed night owls became medieval timekeepers and crime busters, rousing sleeping citizens in the event of emergencies.

Today, there are only a handful of cities that cling to such antiquated traditions. In fact, apart from the cathedral tower occupied in Lausanne, and others in Rothenburg ob der Tauber, Dinkelsbühl and Nördlingen in Bavaria Germany, there are hardly any others left on the planet. Horn blowers in Krakow, Poland, and in Ripon, England, meanwhile, maintain their own traditions by setting the night watch with ceremonial bugle blasts. Against a background of change, including mitigating factors such as the reformation of law enforcement, street lighting and CCTV, it is little wonder that the vocation has all but vanished.

A once-upon-a-time quality remains. The Night Watchmen exist in a bubble, or “out of time,” as Haeusler puts it. The last in a long line of watchmen, who have been manning this post since November 1405, he steadfastly maintains a longstanding medieval tradition – pure and simple –to safeguard the city’s cultural heritage. Ironically, he has not worn a watch for more than 40 years yet copes stoically with his decades-long nightly vigil. “In real terms, what I do isn’t important,” he said. “But according to history and tradition, it has tangible value. I’m a witness to the past.” It works like this. At 22:00 every evening, the first call is made. “C’est le guet! Il a sonné dix.” (“This is the lookout! The bell has tolled 10!”). The slightest of pauses and the Watchman’s voice drifts across the rooftops. Then another call. “Il a sonné dix!” Each time, the call is amplified through cupped hands, directed to the four points of the compass, then repeated each hour until the shift ends at 02:00. At no point does the Watchman ring the bells, like they used to do in medieval times.