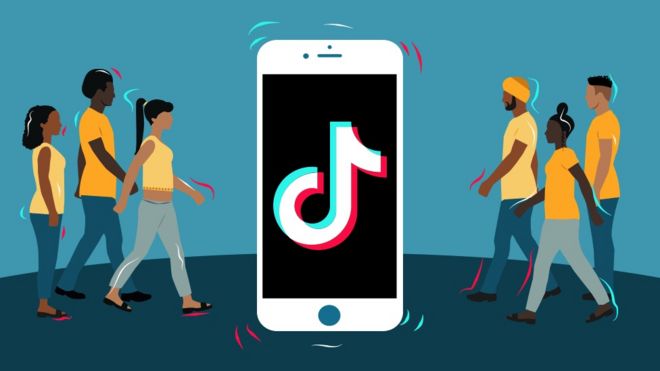 “We may be banning TikTok,” President Trump told reporters, saying an announcement could come as soon as this weekend.

He added there were other options – but how might a ban work?

One obvious starting place would be to order Apple and Google to remove the app from their online stores.

This might be done by adding TikTok’s owner Bytedance to a Commerce Department entity list, and forbidding US firms from working with it – a similar tactic was used to stop Google providing its apps to Huawei.

That would prevent new users from being able to download the app.

Existing users would be prevented from receiving notifications and installing updates, although they would still have the app on their devices.

One way to address this would be to tell Apple and Google to use a “kill switch” facility they both have, which lets them remotely wipe or prevent blacklisted apps from launching.

A Brazilian judge once threatened to force the two firms to use the power in 2014, but ultimately backed off.

Apple and Google would likely be loath to take control of users’ smartphones in such a way and might even resist such an order.

So an easier alternative might be to compel local internet service providers to block access to TikTok’s servers.

This would have the added advantage of preventing TikTok’s videos being viewable via its website.

India took such a measure when it banned TikTok and dozens of other Chinese apps. And users have reported being unable to circumvent the block by using a virtual private network (VPN).

But it’s not clear how Mr Trump would enforce such an order.

A less draconian approach would be to ban TikTok from being installed onto federal employees’ work phones.

Congress has already voted in favour of the idea and the Senate is still considering it. But that would be a much less dramatic move than Trump seems to be hinting at.